Sounding Aberdeen is an ongoing multi-output intermedia project using sounds recorded in the city of Aberdeen, Scotland over a period of fifteen years, from 2005 to the present day. It addresses issues of memory and identity by examining relationships between sound and place and our responses to them.

The six constituent parts are:

Aberdeen soundsites (2014) is a community-driven sound mapping project which allows users to upload sounds from Aberdeen which they have recorded and, via social media, to develop sound conversations about these sounds.

Image 16: City of Ghosts (2015) is an 8-channel sound installation for a photography exhibition with images by John Perivolaris and text by Ed Welch. I visited the locations in Aberdeen where fifteen photographs were taken and made audio recordings, being careful to document what I thought John might have seen as well as trying to focus on sonic aspects which might not be detailed in the photographs. I was particularly interested in the sounds that were in my recordings but were absent from John’s images – for example, traffic sounds were ubiquitous but absent from the photographs – even the car parks in the images are empty

Granite Sound (2015) is a locative audio work created with Suk-Jun Kim consisting of a pair of one-hour guided sound walks with accompanying radiophonic soundtrack listened to over headphones. A number of locations or dwelling points are joined together via the walk and reflect an aspect of granite and the history of Aberdeen through sound as well as around themes of excavating and exporting. Sound files are triggered via GPS and each walk has a number of dwelling points where walkers can pause and contemplate their location both visually and aurally.

[M]apping Aberdeen (2016) is an iOS mobile application created with Heather Morgan, Ed Welch and Andrew Sage. The app offers a set of cultural walking routes around Aberdeen for locals and visitors, which uncover alternative, quirky or unusual places on and off the beaten track. It encourages users to explore the city through sound and image in new ways, with the opportunity to capture and save sounds and images they are drawn to.

Stolen Voices (2017) is an 8 channel fixed media composition created as part of the Stolen Voices project devised by performance artists Johanna Linsley and Rebecca Collins for Silver City Stories. The piece deals with the idea of eavesdropping and is made entirely from recordings made around Aberdeen presented as half-heard phrases allowing the listener to formulate their own narratives, based on their own experience of Aberdeen or similar places.

Hilton Soundscape (2018) is a Google Earth based sound map and sound romance. Sounds were recorded in 2013 at what was then the campus for the School of Education of the University of Aberdeen. Shortly after this the campus was replaced by a new housing development. Yellow pins on a GE map allow users to listening to the recorded sounds, read text about them and make their own responses to the sound. The next stage is to make further recordings at the location as it is now and place these under different coloured pins, creating a kind of sonic archaeology. 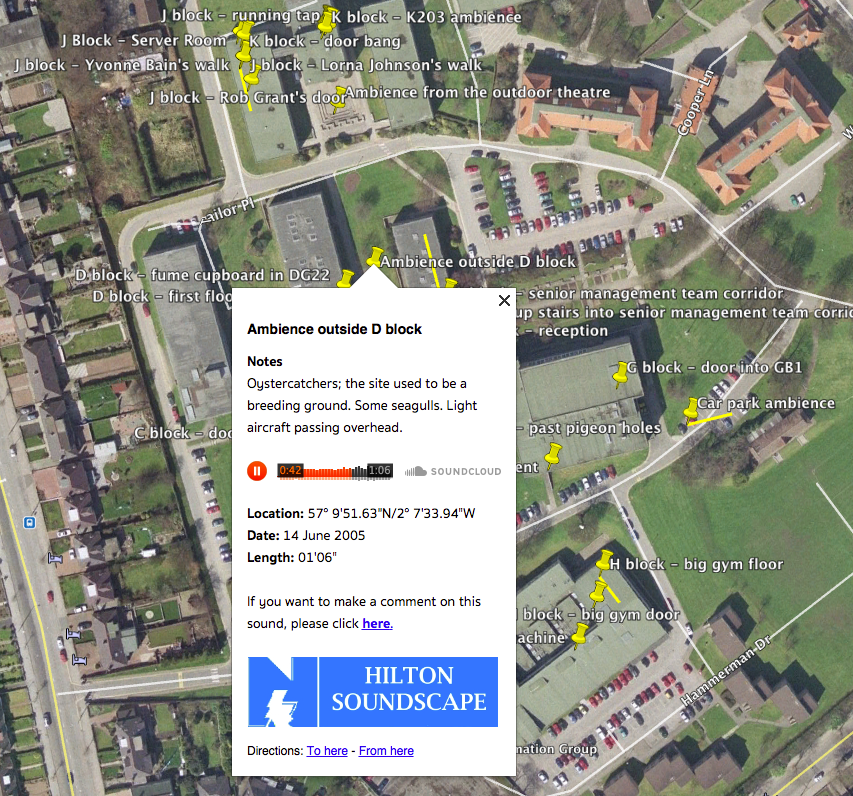