Merik+
2 October 2018
Merik+ is a multidisciplinary artist from the north east of Scotland, a founding member of antipop group “sheep” and current .W.M. of Sweӕtshops®. Their practise centres on intertwined sound and performance crafted from the waste materials of post-industrial capital to manifest new archetypes and allegories for cultural phenomenon. Often
provocative in nature their work has taken place in a vast array of venues and public spaces with the set and setting of event often providing an axis for the piece itself. These spaces have included everywhere from Summerhall to abandoned supermarkets to the 2018 X-Factor auditions. Most recently they performed an 18 day run at the Edinburgh Fringe Festival as “Sawney Ha’peth’s Free Cringe Festival”, an exploration of the interplay between national identity and commodification which was subsequently shutdown due to “unsettling noise” and “cultural desecration”.
Along with their self-released material, selections of their work have been made available through various independent labels and compilations. They are currently studying in Sonic Arts (MMus) after being awarded a fee waiver and continue to perform and exhibit actively around the UK. 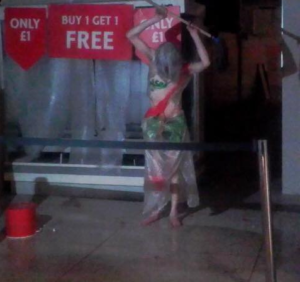