Maja Zeco (born 1987 in Sarajevo, Bosnia and Herzegovina) is an audio-visual artist, designer and VJ.

In October 2015 she received a studentship for a practice-led Ph.D from the Scottish Graduate School for Arts and Humanities. Her topic is “Placing sound: The Role of Aurality and Visuality in Locating Identities”. She is based at Gray’s School of Art, Robert Gordon University, and the partner institutions hosting her Ph.D research are the University of Aberdeen, and Woodend Barn, Banchory.

She obtained a BA and an MA in Visual Arts, and Visual Communication Design, at the International University of Sarajevo. Her MA thesis was focused on the historical, theoretical and applied aspects of the visualisation of Electronic Dance Music. In the period 2010-2015 she worked at the International University of Sarajevo as assistant/senior assistant on the courses related to graphic design, video editing and animation. 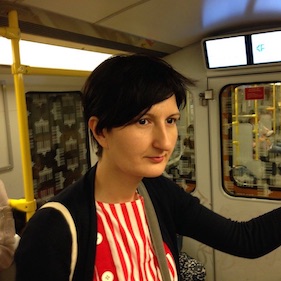 She has collaborated with numerous audio-visual artists at home and participated in a number of international shows (in Bosnia, Serbia, Croatia, Slovenia, Macedonia, Austria, The Netherlands, Bulgaria). She has been a collaborator and performer in the performances and concerts of Cultural Association Ambrosia since 2010. In December 2013 Timur Sijaric and Maja Zeco reached the final of the Fidelio-Wettbewerb Scholarship competition at the Muth Conservatorium in Vienna with a joint audio-visual piece. In October 2015 she presented a live video work on the Rediscoveries, concert series organised by Aberdeen University, Music Programme. In February 2016 she did a performance sketch as part of the SlowCooker workshop series in Aberdeen (Peacock Gallery) and in March she participated in the Sound Thought Conference held at CCA in Glasgow with the lecture-performance “Placing Sonic Dialogues”.